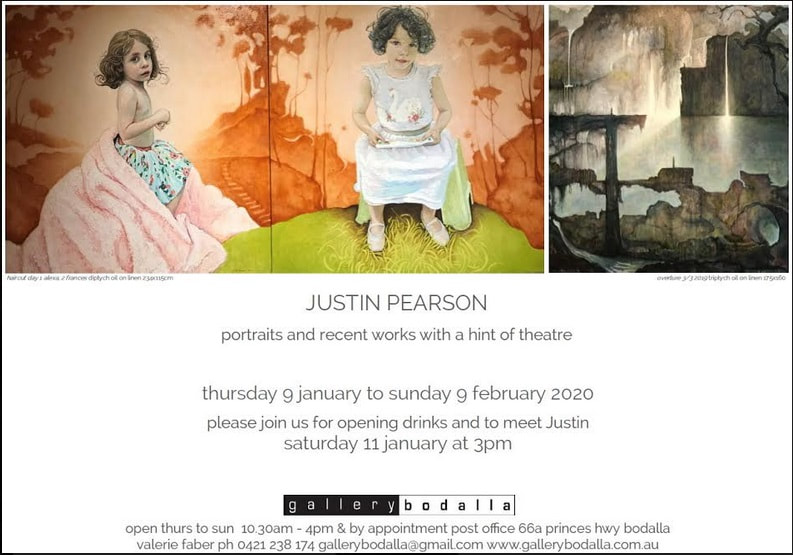 One of his exhibitions was at Gallery Bodalla  from January 18 to February 25, 2018.

Inspired by classical mythology, Justin's landscapes, figurative paintings and quirky sculptures are full of movement and beauty.  As a studio painter, Justin celebrates the themes and narratives of mythology, love, loss, yearning and power, in thick rich oil paint, which dances and swirls on its canvas or board.

“He produces fantastical images celebrating feelings that are all too human in nature, all brought together with the most beautiful use of colour,” Gallery Bodalla director Valerie Faber said.

“I am drawn to the timeless, universal themes and metaphors that comment on society, politics, power and love.  These paintings depict a range of mysterious landscapes, embracing figures of moral ambiguity, whilst others are celebrations of heroic strength and uprisings,” Justin said.

Born in Christchurch, Justin left New Zealand and made his way to London in 1981, where he completed his Bachelor of Fine Arts at Byam Shaw School of Art (Central Saint Martin’s College of Art and Design).

He is represented in private and corporate collections in New Zealand, Australia and the UK and has won several awards including the Southern Highlands Portrait Prize, 2013, the Fettlers Heritage Art Prize 2011 and the Heysen Prize in 2007.
He has also been a finalist in The Adams Portrait Award, Wellington New Zealand, the Fishers Ghost Award, and a semi-finalist in the 2014 Doug Moran Portrait Prize with a portrait of the artist Euan Macleod.
www.gallerybodalla.com.au
Major Exhibitions